If you have issues with your domestic well, please contact Self-Help Enterprises at (559)802-1285.

July 20, 2021. This was a Zoom/ In-person event. To watch the recording of the event, please click the link below and enter the passcode (Passcode: &6&WPm6a)

A drought is an event of prolonged shortages in the water supply, whether atmospheric, surface water or ground water. A drought can last for months or years, and can be declared after as few as 15 days. It can have a substantial impact on the ecosystem and agriculture of the affected region and harm to the local economy. Annual dry seasons in the tropics significantly increase the chances of a drought developing and subsequent bush fires. Periods of heat can significantly worsen drought conditions by hastening evaporation of water vapor.

California’s severe drought was made worse this year by a shocking surprise. Every year, much of the drinking water that flows through the taps of millions of Californians begins in the Sierra Nevada. In a normal year, snow and rain falls on the vast mountain range during the winter months, and the water moves downhill into streams, rivers and reservoirs in the spring and summer. This year, in a trend that startled water managers, much of that runoff simply vanished. This meant ground the was so dry that the water soaked in before making it down the mountain. 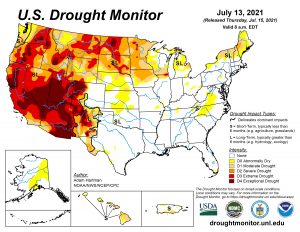 Severe drought conditions like those now gripping the West have adverse consequences for people, businesses, and nature. These impacts are not evenly distributed. Small and rural communities, many of which have a greater proportion of low-income households and people of color often feel the worst effects. Freshwater ecosystems are at serious risk from low water flows and high water temperatures, and water-quality issues are worsened by increased salt and contaminant concentrations and reduced oxygen levels. Surface water shortages for agriculture lead to more groundwater pumping and continued overdraft causes land subsidence, property damage, drying of domestic wells, and a permanent loss in groundwater storage.

Fish and Wildlife: Droughts in California are especially hard on natural ecosystems already suffering from overuse and contamination. In 2014 and 2015, 95 percent of young, endangered winter-run Chinook Salmon died due to high water temperatures on the Sacramento River (sfgate.com/bay area), increasing the risk of regional extinction of already threatened salmon and other fish species.

Wildfire:  Wildfires are becoming more frequent and severe and are starting earlier in the year and lasting longer. Low soil moisture and lack of rain worsens pest outbreaks and tree deaths, which in turn further increases wildfire risks and concern is growing for an extremely severe fire risk this year.

Agriculture: In the face of water shortages, farmers have to look to alternative supplies and practices, such as purchasing water through temporary transfers, pumping more groundwater, changing the types of crops grown, installing efficient irrigation systems, and fallowing land. As efforts to implement California’s Sustainable Groundwater Management Act (SGMA) expand, constraints on groundwater pumping — in both wet and dry years — will grow, further complicating agricultural responses to drought.

Rural Communities: Rural communities throughout the west are often dependent on a single water source, which increases their vulnerability to drought. During the past severe California drought, many shallow rural groundwater wells went dry as deeper agricultural wells depleted groundwater, causing major impacts on some communities. Declining water supplies and water-quality problems this year may force communities to switch to costly bottled water, dig deeper wells, and truck in emergency supplies of water. These actions impose local economic hardships on those living in rural areas, many of whom are among our most disadvantaged communities.

Urban Areas: A diversified water supply means that urban areas are usually not at high risk of running out of water, but severe drought typically leads to voluntary and mandatory efforts to cut use. There is capacity to create additional supply through water conservation in these areas. Water utilities are already beginning to implement mandatory and voluntary water-conservation programs, including educational programs, incentives to install water-efficient devices, and restrictions on discretionary water uses like car washing and watering lawns, and new cutbacks are likely as the drought continues.

Energy: Drought can strain the energy system. Past droughts have led to declines in hydroelectricity generation, leading to a shift to more expensive and polluting fossil fuels. Electricity generation from thermoelectric plants may also be curtailed if insufficient cooling water is available or if temperature limits in receiving waters are exceeded. Pumping costs to farmers increase as groundwater levels drop. Additionally, higher temperatures associated with drought reduce the efficiency of thermal power plants and of transmission and distribution lines while increasing energy demand for cooling systems.

The western United States is experiencing its worst drought this century, threatening to kill crops, spark wildfires and harm public health as hot and dry conditions are expected to continue this month. More than 93% of the land in seven Western states is in drought conditions, and nearly 59% of the area is experiencing extreme or exceptional drought—the two worst conditions—according to the latest figures released by the U.S. Drought Monitor.

Both figures are the highest this century for the area that covers all of Arizona, California, Idaho, Montana, Oregon, Washington, and most of Utah. Before this year, the record for Western land in extreme or exceptional drought was 43%, set in September 2003. The conditions have led to fire and fishing restrictions across the West and have prompted wildfire alerts. The National Interagency Fire Center is warning that the intensifying drought across the West is creating significant wildfire risk over the next three months from California to the Northwest and across the northern Plains.

“Last year, we had a lot of wildfire and a lot of smoke. It would be very surprising if that did not happen again this year,” Douglas Kluck, NOAA’s director of regional climate services in Kansas City, said in a virtual presentation last week. Agriculture Department reports show that several crops, including wheat, sunflowers, and barley, are threatened by the extensive drought, which is concentrated in the West but is also affecting areas as far east as the Dakotas, Minnesota, and Iowa. “We have huge concerns up in the northern Plains. Conditions are not good,” Dennis Today, director of USDA’s Midwest Climate Hub, said during the presentation. The Drought Monitor said drought-stricken ranchers are selling their cattle because of a lack of feed and poor forage conditions.

At least eight national forests in the West have imposed fire restrictions. Fishing restrictions have been imposed on many rivers because of low flows and warm waters. Although drought conditions have been exacerbated by recent record temperatures in the West, Kluck said the current drought has been developing since the spring of 2020.